Located in the Southern region of Hungary, Pécs is known to be an incredibly diverse, peaceful, Mediterranean city. The city was awarded the UNESCO Cities for Peace Prize in 1998 which “pays tribute to the initiatives of municipalities which have succeeded in strengthening social cohesion, improving living conditions in disadvantaged neighbourhoods and developing genuine urban harmony.” In 2010 Pécs, “The Borderless City,” was selected to be the European Capital of Culture along with Essen, Germany and Istanbul, Turkey. Cities chosen serve to “provide living proof of the richness and diversity of European cultures.” Last Saturday, I went to this prized city with a friend and fellow Central European Teaching Program teacher, Emily.

Emily and I left from Budapest Keleti railway station (Budapest Keleti pályaudvar) at 07:45 and arrived in Pécs at 10:41. Roundtrip tickets cost us 7.900Ft ($37.76) and the IC (Inter-City) train supplement cost 1.310Ft ($5.76). When you take an Inter-City train, you have to make sure you purchase the mandatory supplement along with the regular ticket. Remember this note for later. The train ride there was breathtaking – the Hungarian countryside is absolutely charming. While on our nearly three hour train ride, we were serenaded by a man in our cabin singing to himself in a painfully high octave.

Upon leaving the train station, we marched blindly into town. With no map or signs in sight, we used my faint recollection of the city map I saw weeks ago and common knowledge to find the center of town. Our first stop was the main square, Szechenyi tér. At this square one can find (along with obvious city structures like City Hall, etc.) the Mosque of Pasha Qasim (now a Roman Catholic church). This mosque was built between 1543 and 1546 by Pasha Qasim the Victorious during the Turkish Occupation. A minaret used to stand by the mosque, but it was destroyed centuries ago. Unfortunately the mosque was closed during our visit. A randomly placed, anatomically correct horse statue took over a large portion of the square. I have no inkling as to what the horse statue was about, but just know that Pécs is home to a severely anatomically correct horse statue. 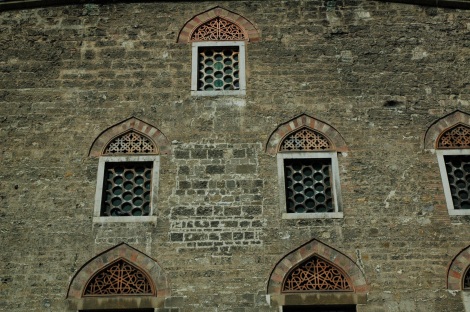 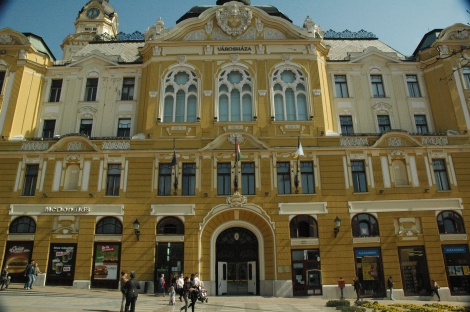 City Hall and a McDonald’s.

The horse. I spared you with angles. 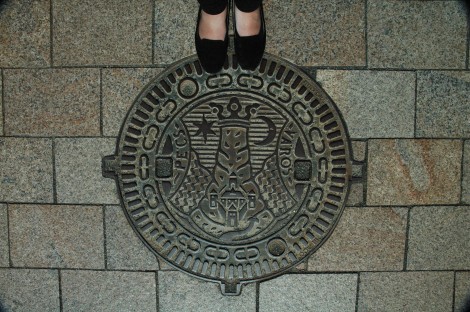 Our next stop was the Post Office Museum (Posta Múzeum). Again, it was closed, but the outside – particularly the roof – is what I wanted to see. Large leaf-less trees blocked my view, so while I dramatically cursed at the trees, Emily jetted off to a questionable walkway that was connected to a large stone wall. I followed, but the small heels on my shoes kept getting stuck in the drastically uneven, bouncy planks. Do not get me wrong, I found the walkway nice and useful – I am just saying that shoes with heels do not belong on it. Now elevated, I was able to see the tiles on the top of the museum in all of their splendor. 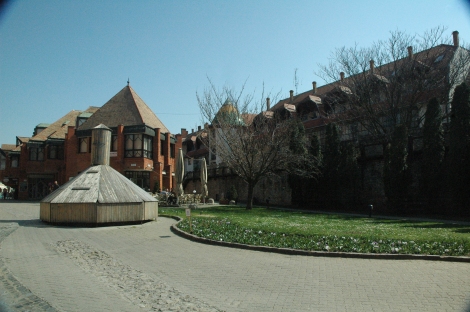 The questionable walkway to the right. 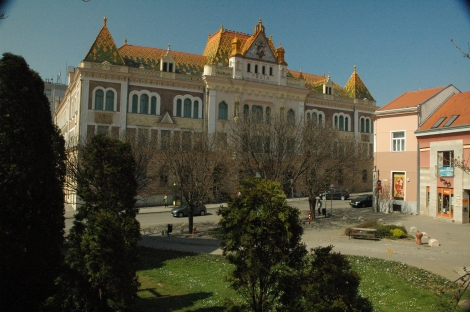 The next destination on our daytrip was the Jakovali Hassan Mosque and Minaret (Jakováli Hasszán Dzsámi és Minaret). In good fashion it was closed as well. We could see the minaret behind the mosque, but we could not figure out how to get to the other side of the building. The mosque, also built in the 16th century, is now wedged between two other buildings. We saw a road and attempted to walk down it, but then we realized that it was for cars on their way to the neighboring hospital. In panic, we awkwardly ran the other direction and tried to go on the other side. Our attempts, however, were all in vain – the hospital reigned supreme in that part of town, wrapping its arms around the old Islamic mosque. Determined to get a view of the elusive minaret, we decided to brave the first road with great success – we were now in the courtyard of the hospital/in the presence of the minaret. The mosques in Pécs are the first I have ever seen (that I am aware of), but I have seen a minaret once before in the city of Eger. While in the courtyard, we were serenaded by another man. This time, however, it was in deeper vomiting tones.

Emily through one of my lens.

After leaving the mosque and minaret, we quickly admired the Barbakán then stopped at Pécs Cathedral and Basilica (Pécsi bazilika és székesegyház) or The Saint Peter and Paul Cathedral. The origin of the cathedral dates back to the 4th century. During the reign of St. Stephen (Szent István), the first king of Hungary, the original church became the crypt when a new church was built on top of it. The present day church took on its form during the 19th century. In 1991, Pope John Paul II came, prayed between the ancient walls, and bestowed the title of “basilica minor” to the cathedral. 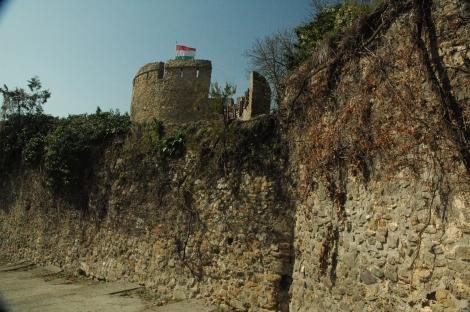 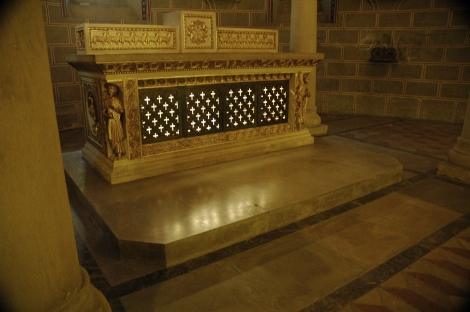 The site I was most excited about was next – the Early Christian Necropolis of Pécs. If you’re new to my blog, a common theme is that everywhere was Roman at one time. The modern day city of Pécs used to be known to the Romans as Sopianæ in a province called Pannonia. As mentioned in previous posts, the present day city of Budapest was also in this province and was known as Aquincum. There are currently only eight UNESCO World Heritage Sites in Hungary and this cemetery is one of them. Major sites within this necropolis are the Cella Septichora, Wine Pitcher Burial Chamber, Peter – Paul Burial Chamber, and the Octagonal Burial Chamber. Out of all of the chambers, the Peter – Paul Burial Chamber was my favorite. 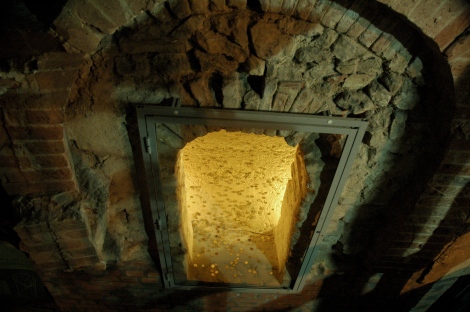 How and why did people throw money in the burial chambers? 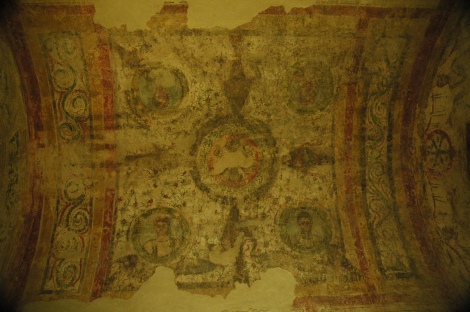 After buying some post cards and drawing an anime version of myself in the guest book, Emily and I made it our mission to get ice cream before heading back to Budapest. The wind made sure everyone knew of its presence on Saturday, so our ice cream endeavor would soon involve some completely innocent men who made the mistake of sitting beside Emily. As our ice cream melted at an alarming rate due to the warmth of the sun, Emily took a bite of the cone at the worst possible time – a huge gust of wind blew the sticky droplets all over one man in particular. Laughing was the only option. We left soon after the incident and made our way back to the train station.

Finding good seats, an overwhelming feeling came over me. I had a hunch that the woman at Budapest’s train station did not give us IC tickets for the ride back. I sometimes calculate trips to the point of borderline insanity, so at Keleti when I noticed that the tickets were not at the price initially anticipated, I questioned it (as in I asked the ticket woman and then went to customer service). With seven minutes before our train was to leave, I succumbed to my hunch and ran to find a worker. I asked him if the tickets were all clear and he confirmed my suspicion – the woman failed to give us the IC supplement for the way back. I ran back to the train, grabbed Emily, and ran inside the station to get what we needed. Politely throwing money at the cashier, she understood our panic and politely threw our supplements at us. We made it back to the train just in the nick of time. Out of all of the places I have been to thus far in Hungary, Pécs is definitely one of my favorites. Believe the hype.

Oh, and lastly: I am going to Croatia for Spring Break! I will be eating air and other free things until then.

2 responses to “Pécs: A European Capital of Culture”