Last Wednesday four friends – Kate, Maxim (pronunciation: Maxeem), Molly, and Emily – and I packed ourselves into a borderline clown-sized car and made our way to Croatia (and no worries – history did not repeat itself). Our first destination was the capital – Zagreb. I had previously been to Zagreb before, but it was only in route to Ljubljana. We arrived two hours later than anticipated because hangry (hungry + angry) is real and should be treated as soon as possible. A dramatically long blink would be how I would describe our stay in Zagreb – in the morning we were off to one of our main destinations: Plitvice Lakes National Park (Nacionalni park Plitvička jezera).

Before I ramble on about how incredible the lakes were (and obviously still are), let me now tell you of the time I built my first snowman (ever) in the middle of April, during spring break, in Croatia, at 25 years of age. On our way to the town of Rudanovac – the location of the flat we rented through Airbnb – we got caught in a snow storm. To make matters worse, a truck had flipped on the small two-lane, hilly road. Although we had only eight minutes left until we were to reach our destination, it took us much longer to get past the traffic. Despite the fact that I have only seen snow five times in my native Georgia, I do not consider snow to be a privilege or joy to see. Luckily I do not mind the cold/do not get cold easily. Kate and I made the best of the situation and built an adorable snowman. Unfortunately for my friends/fortunately for Disney, I had every Frozen song stuck in my head. DO YOU WANT TO BUILD A SNOWMAN?

Me, Kate, and our snowman + snow on my lens.

The view from our balcony.

Plitvice Lakes National Park, a UNESCO World Heritage Site, is thought by many to be one of the most beautiful natural sites in Europe. The lake system (16 interconnected lakes) is divided into two parts – the upper lakes and the lower lakes. According to UNESCO’s site, the upper lakes “lie in a dolomite valley and are surrounded by thick forests and interlinked by numerous waterfalls” and the lower lakes “are smaller and shallower, lie on the limestone bedrock and are surrounded only by sparse underbrush.” There are several different hikes to choose from (represented by letters) that range from two to eight hours. My friends and I chose “H”: both lakes – four to six hours long. I fully recommend doing this particular hike, or to be more realistic, walk. If you choose anything before “H,” you will only get to see one part of the lake system. My friends and I could have finished the hike in under four hours, but 1) we missed the boat (oh yes, a boat!) by seconds 2) Kate and I ventured off onto an optional set of stairs 3) pictures were a must. Another recommendation: Go early! We were essentially alone for the upper lakes (we started at 9AM), but by the time we reached the lower lakes, the crowds started to pile in. The walkways are small, so unless you like the added danger of being pushed off a wooden walkway into a mass of clean, beautiful water, heed my advice. 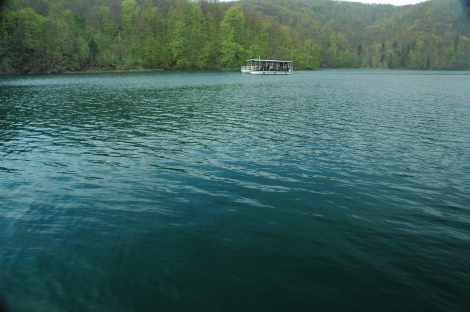 Molly, Kate, Maxim, me, and Emily in front of the Big Waterfall (Veliki slap).

Our next stop was Split, part of the Dalmatia region. Before we came to Hungary in 2012, one of my best friends, Jesse, wanted nothing more than to visit this city. I finally understand the appeal – it far exceeded my expectations. The juxtaposition of the tall mountains and the beautiful Adriatic Sea was mind-numbing. Another UNESCO World Heritage Site, Diocletian’s Palace, was built here between the third and fourth centuries AD. The Roman Emperor Diocletian was born near the modern-day Split in a town called Aspalthos. Like most places I have visited, the Ancient Romans have left a lasting impact on the history of the region. Diocletian’s Palace “represents the most valuable example of Roman architecture on the eastern coast of the Adriatic.” Located on the premises is St. Dominus’ Bell Tower, which my friends and I climbed for 30kn ($5.46/1220Ft) each. The construction of this 60 meter high tower began in the 13th century and took more than 300 years to complete. In addition, we visited the Temple of Jupiter (if you are on a budget, skip this one room, one statue temple). Running themes occur often in my writings, so from here on out you can go ahead and correctly guess that Game of Thrones will be talked about. Scenes from the fourth season of Game of Thrones were shot in the basement of this palace. 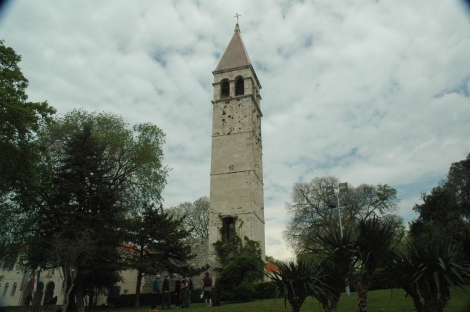 View from the tower.

Although much of our time in Split was spent within the palace walls, we did romp about in other locations. After walking around the “Riva” promenade, we climbed up Marjan (pronunciation: Maryan) and were treated to stunning views of the city. At the first lookout point there is a Jewish cemetery behind a café. To gain access to it, you need only to ask the café staff for the key – they will unlock it for you. This cemetery was established in the late 16th century and has over 700 graves. As previously mentioned, I am a graveyard girl, so of course I enjoyed myself. I did not bring my DSLR when Maxim, Emily, Kate, and I walked around the coastline, but do know that it was spectacular. The four of us climbed (and threw) rocks, strolled about, and sat at a seaside bar and enjoyed each other’s’ company and witty banter. It was here that I realized (thanks to my friends) that the Dalmatian dog breed comes from here – Dalmatia. 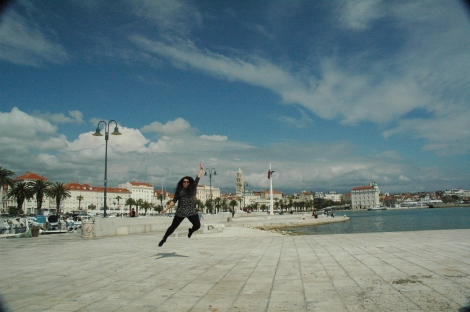 Molly in the cemetery. 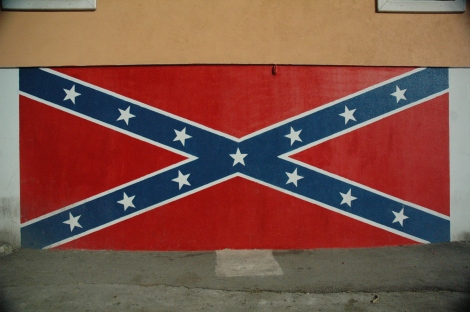 Next on our Croatian adventure was the Fortress of Klis (Tvrđava Klis) – you guessed it: another Game of Thrones filming location (Season Four). Located not far from Split in the town of Klis, the Klis fortress is one of the most significant fortifications in Croatia. The brochure that I snagged has this tag line printed on it: “Welcome to Klis: The Key of Dalmatia.” The area has been inhabited since the second century BC, when the Illyrian tribe of Delmati first arrived. The first mention of the area having a fortress was in the 10th century. Maxim, Kate, Emily, and I are all fans of Game of Thrones, so in addition to heated discussions, we also gave ourselves aliases. I took a quiz which stated that I belong to House Baelish, but Maxim considers me to be half-Petyr, half-Tyrion. Since I already have the habit of writing things down, I followed in the footsteps of my alter-egos and became the Master of Coin (I kept track of our finances). 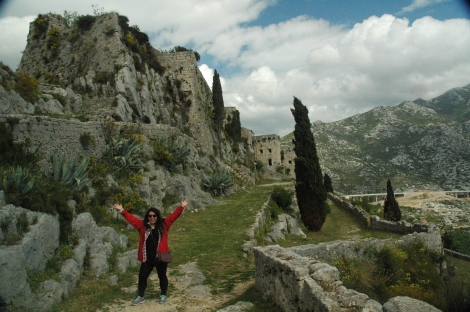 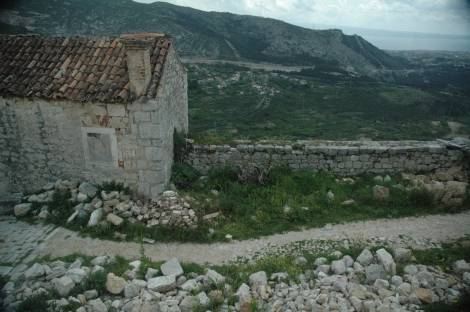 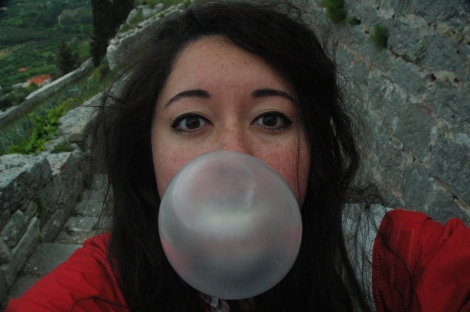 Dubrovnik was the last daytime excursion for us (we stayed four nights in another flat rented through Airbnb). We drove through the lovely Dalmatian coast on windy roads that could make the heartiest person potentially carsick. We even crossed through a portion of Bosnia and Herzegovina – I am so excited to go there this summer. Like most of the other places that I have mentioned, Dubrovnik is both a UNESCO World Heritage Site and a filming location for Game of Thrones (King’s Landing). The stone walls surrounding Old Town – 2km/1.24mi in length – are this city’s main features. To walk around on the walls costs 100kn ($18.17/4.070Ft) and it is well worth it. Unfortunately for us all, the sky cried for 98% of the time we were in this city. The rain finally stopped when we were on the last leg of our wall tour. Due to the rain, however, we had most of the walls to ourselves. I can only imagine (aka Google Image Search) what the city would have looked like in the pure, unadulterated sunlight. Orange stands are prevalent on the Dalmatian roads, so I made Maxim buy me a bag from a lady who applauded him for traveling with four women. These oranges are delicious, I promise you this. Eating them while typing, however, was not one of my brightest ideas. 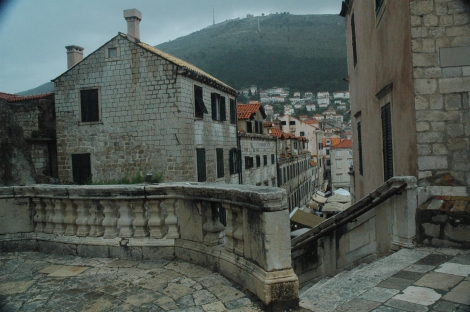 My friends and I spent one last night in Split before we made the journey back to Budapest. The majority of us ate store-bought food for the duration of our trip, but decided to treat ourselves for our last supper together. We made it to a restaurant seconds before the fury of the rain gods came down upon us. Determined to get seafood, Emily and I mused over the options. Mind you, I am terribly afraid of fish, but I will eat it when it does not look like fish (aka cut up). Emily chose sea bass and I decided on the mysterious monkfish – at the time I had no idea what it looked like. For those of you do who know already, imagine my horror when I Googled it later. THE HORROR. The menu said “monkfish medallions” so I naively thought they would be cut into circles? Nope, I got the whole backend of the fish – tail and all. I suppose I will never learn.Thank you,Molly, for removing the tails from my plate.

With the exception of Hungary and Italy, I have traveled in this country the most extensively – I suggest that you put visiting this country on your to-do list.

A Lesson From Miss Jennifer: Always bring a plastic bag with you, especially if the forecast calls for rain.

6 responses to “Croatia: I am Petyr Baelish”