On Saturday twelve Central European Teaching Program teachers and I went to Szolnok to attend a Goulash Festival. There are many types of goulash, but it actually originates from the medieval kingdom of Hungary. Goulash is known as gulyás (pronunciation: goo-yahsh, translation: “herdsman”) and is a soup/stew of meat and vegetables seasoned with paprika. It is, hands down, my favorite Hungarian dish. It is relatively easy to make (I have helped make it twice), so try it out! 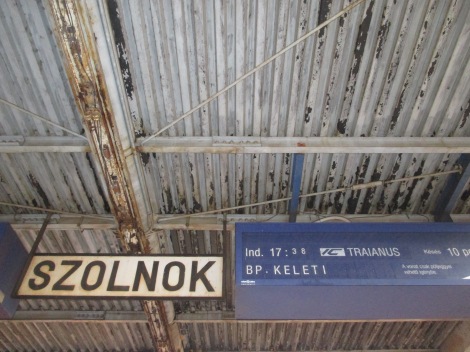 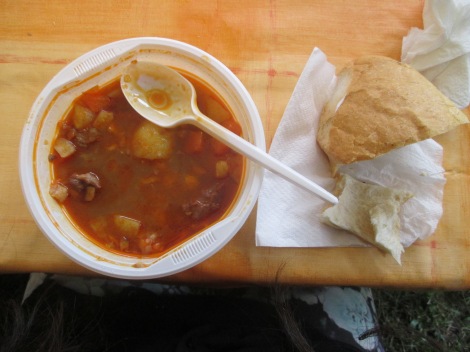 Goulash. And yes, my long hair usually gets in my food.

The city of Szolnok is located an-hour-and-twenty-minute-train-ride west of Budapest. Since I am a teacher and get 50% off of all train tickets within Hungary’s borders, I only spent 2.100Ft/$8.64 for a roundtrip ticket. Emily, a fellow CETP staff member who lives in the city, met me, Matt, Kendahl, and Carlyn at the train station and promptly showed us “Hungary’s tallest building.” It was (wait for it) a staggering 24 stories tall. 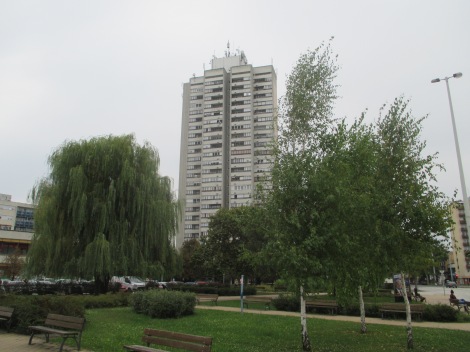 After a thirty minute stroll and crossing Central Europe’s longest pedestrian bridge (Tiszavirág híd), we made it to the Szolnoki Gulyásfesztivál, established in 1999. We grabbed a table in what just so happened to be the “foreigner tent,” ate goulash, and did shots of pálinka (Hungary’s famous fruit brandy).

Me and Rosti, my Czech prince.

We ended up meeting the mayor the Szolnok and some wildly entertaining Estonians. In short: I got singled out as an obvious foreigner, one person ended up dancing on a table with one of the Estonians, we all got free shots on them, Matt, Kendahl, and I got invited to this other’s guys house in Estonia, we were given special Estonian candies, and last (but certainly not least) we all toasted to President Barack Obama. Cheers to that, indeed. 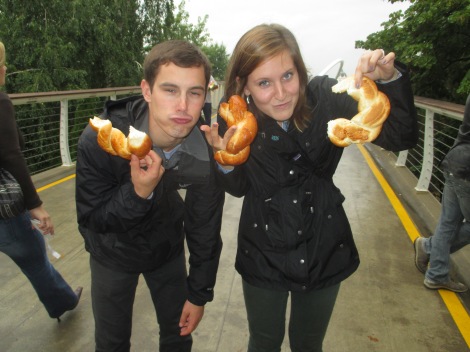 We got free bread which ended up being delicious. I think the free aspect made it taste even better.

In other news, life without a computer is harder than anticipated. It is hard to plan trips, research and apply for future jobs, communicate with friends and family, and keep up a blog without one. My computer died back in the beginning of June and the realization that I will probably not be able to afford a new computer is now hitting hard. Why couldn’t my princess last just one more year? I was so good to her.I apologize now for these lower quality photographs. I cannot use my DSLR without a computer (long story).

On the money note, I have planned and booked most of my fall break. I will be going to Belgium and the Netherlands! My roundtrip ticket was under $100 (22.530Ft/$92.65) and I will be staying at Elena’s house for four out of the five nights. I am really excited to go to the Netherlands because 1) I am excited to see Elena and 2) I almost applied to graduate school there. Although I live in Central/Eastern Europe, the bulk of my travels have been in Western Europe. Hopefully we do hit up that guy in Estonia (right? Matt? Kendahl?).

I could not document the CETP orientation that happened a few weeks ago, but overall everything went well. If you are interested in the program and want to find out more, please email me at the address provided in the about section. School has obviously started (I am actually typing this blog post from my school computer right now). As far as I know, this should be my last year in Hungary, but then again I said that last year…

I also tried Georgian food (as in the country, not the state). Beans, beans are good for your heart…

A Lesson From Miss Jennifer: Living paycheck to paycheck is not glamorous.