Yes, I got caught up in a stampede in a city with a population of 14 million. I also found and consumed three bags of Doritos. You win some, you lose some. For the spring holiday, I ventured off to both Turkey and Bosnia and Herzegovina with two friends and fellow Central European Teaching Program members – Jolan and Carlyn. As mentioned in an earlier post, we initially planned on backpacking through part of the Balkans (Serbia, Bosnia and Herzegovina, Croatia, and Montenegro). Realizing that our plan was a bit ambitious, we booked cheap flights from Budapest to Istanbul (20.690Ft/€69.71/$73.91), then from Istanbul to Sarajevo (11.060Ft/€37.26/$39.51). You need a visa to enter Turkey, so buy yours online in advance – if you are an American citizen, you will pay $20 versus $30. According to the Embassy of the United States in Ankara: “Beginning April 11, 2014, the Turkish authorities will start to phase out the practice of providing visas upon arrival at points of entry in Turkey. Once this program is phased out, all foreigners must obtain their Turkish visas from Turkish missions aboard or from the e-visa application system, depending on eligibility.”

Jolan, Carlyn, and I were accompanied by another friend and CETP member, Dani, and her travel companion, Maggie. We touched down at the İstanbul Sabiha Gökçen Airport, which is located in the Asian side of Istanbul/Turkey (Does this count as being to Asia? I am totally going to count it – hello, three continents!). Instead of taking a Havataş bus shuttle, we got a private shuttle through our Airbnb host for €50 ($53.01/₺139.20). The flat booked through Airbnb was located near Taksim Square in the district of Beyoğlu. The traffic in Istanbul was absolutely atrocious. It took us a solid hour and 45 minutes to make it to our destination (we could have flown back to Budapest in that amount of time). Upon arrival, I noticed that we were located in a part of Istanbul that was far from touristy and should not be walked through at night – this “nighttime flat arrest” will come into play later. Hordes of children played in the litter-ridden streets, stray cats and dogs made homes in the broken crevices of buildings, and the homeless lined the streets with make-shift beds composed of boxes. Although our flat was large and luxurious, we ended up having plumbing problems the first night. 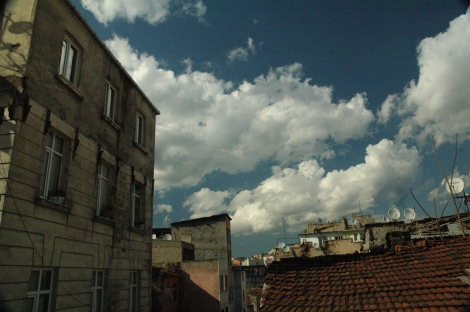 View outside my window.

Plumbing story: Most everything in the flat was brand new – even the toilet. Instead of being a normal toilet I knew how to fix, it had special buttons adhered to the wall. One of the buttons ended up getting stuck, thus causing the toilet to perpetually flush (but not really – nothing would go down). The flushing of toilet paper was strictly forbidden as well. We had to shut off the water when not in use, which was a bit inconvenient since the lever was outside of the flat. The owner could not get the toilet fixed that night, so one of us in particular was doomed. I am not going to call out the funny, smart, humble young woman with beautiful flowing curly dark brown hair, dainty freckles, adorable dimples, and fantastically shaped lips, but she might have done something in a black plastic bag and thrown it away. Word on the street is that she is still single.

The next morning Jolan, Carlyn, and I hit up Hagia Sophia, Topkapı Palace, and the Grand Bazaar. The walk to Hagia Sophia from our flat was roughly an hour long. Luckily the line for Hagia Sophia was non-existent (we arrived a little after 9AM), so we strolled in. The Hagia Sophia (Turkish: Ayasofya – “Holy Wisdom”) is the third building constructed at the site. Emperor Constantius built the first church (called the “Great Church”) in 360, but it was set on fire in 404 during the reign of Emperor Arcadius. The second church was built by Emperor Theodosios II in 415, but was destroyed in 532 during the Nike revolts against Emperor Justinian. Emperor Justinian then built the Hagia Sophia we see today in just five years – it was the world’s largest cathedral at the time. In 1453, after the Conquest of Istanbul by the Ottoman Sultan Mehmed II, the cathedral was converted into a mosque. Lastly, in 1935 the mosque was transformed into a museum. Tickets to the museum cost ₺30 (€10.76/$11.41) a piece. 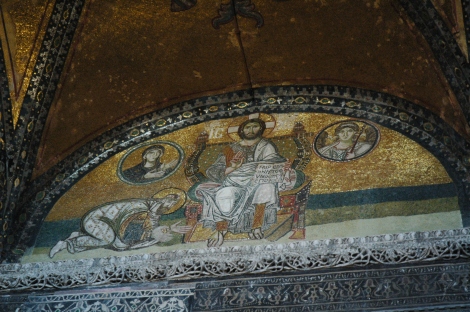 After walking around Hagia Sophia, we got in line for Topkapı Palace. We quickly made friends with a New Zealander named Tom who told us that people generally spend four to five hours in the palace. Flabbergasted, we shouted expletives, scoffed, and said that there was “no way” we would do that. It was 10:30AM when he conveyed that bit of information to us. The time we left? 2:30PM. The joke was definitely on us.

I should do hair tutorials.

Topkapı Palace (Topkapı Sarayı), built in an 18-year-span between 1460 and 1478, “was the administrative, educational and art center of the Empire for nearly four hundred years since Mehmed the Conqueror until Sultan Abdulmecid who is the thirty-first Sultan.” Truth be told, the beauty of the palace was diminished by the lines. You waited in lines to wait in lines. Tom told us that someone at his hostel raved about this massive diamond (fourth largest in the world) in one of the Treasury rooms, so we hopped in line hoping to be amazed. Fine jewellery has yet to impress me – one time my little sister, Amira, and I waited in line at the Smithsonian to see the Hope Diamond. When we approached the glass case, the people around us began to lose their minds. Amira and I looked at each other, laughed, and moved on. The same happened with the Spoonmaker’s Diamond (Kaşıkçı Elması). The story behind the diamond is more interesting than the diamond itself. One story goes that a poor man found the diamond by the shore and exchanged it for three spoons (apparently he did not know its worth and was told it was merely glass). 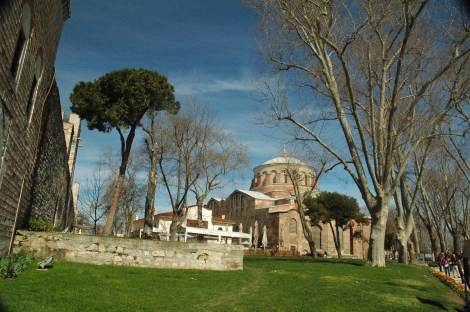 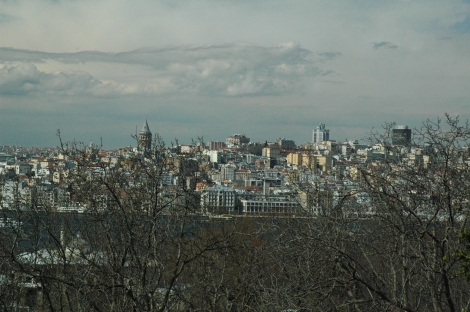 Topkapı Palace cost us ₺30 (€10.76/$11.41) to enter, but we had to pay an additional ₺15 (€5.38/$5.71) to get into the Harem – definitely well worth it. The Harem (the living space of the Sultan, Queen Mother, children, etc.) was my favorite place in all of Istanbul. The tilework was breathtaking – one day I want a room covered in tiles fashioned in the same style.

After mastering the art of waiting in lines at the palace, eating at an overpriced restaurant near the palace, and parting ways with Tom, Jolan, Carlyn, and I ventured on to the Grand Bazaar (Kapali Carsi). People say that you can get lost there – the people speak the truth! Truth be told, the Grand Bazaar stressed me out. I loathe being approached and helped in stores, so walking around this bazaar was a borderline nightmare. Men would yell different ethnicities at me in an attempt to figure out what I mixed with – not one man proved to be successful. “Arabic? Mexican? Brazilian? Spanish? Hawaiian?” I probably heard Arabic the most. As for the men, I am convinced that people hire the best looking ones in their family to be the faces of their stores. I threw Carlyn under a bus one time and she ended up having her hand kissed by a rather nasty fellow. I became the fixation of another man who tried to give me a card that had the directions to his store on it (so I could “find him later”). The front of the store had, wait for it, “Las Tiendas” on it. I may not be the best Spanish speaker in the world, but I did take classes for several years. It was even my minor for a bit in university. He seductively asked me, “Do you know what this means?” I obviously did (“the shops”), but I was way too curious as to what he would say, so I feigned ignorance. He smiled, grabbed my hand, and said, “It means ‘you are so sweet.’” It took everything in my power not to cackle loudly. I ended up buying some things for my family from another, less creepy, man (family: if you want the gifts, I am holding them for ransom – aka I am broke). Whenever we walked by my “lover” he would wave, wink, and do the “call me” hand motion. How about no. 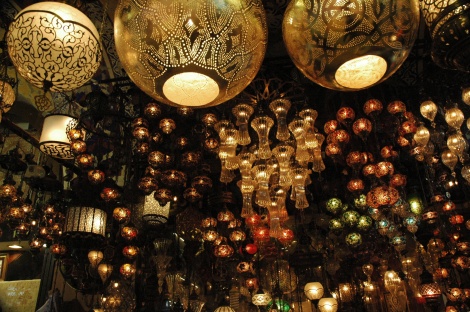 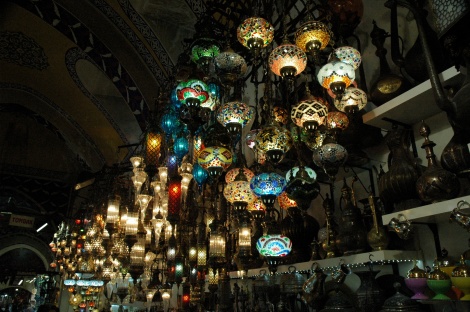 The next morning we met up with more CETP members and friends, Daniel and Tiffany, for breakfast. We had a traditional Turkish breakfast at Van Kahvalti Evi. I do declare that Turkish breakfast is everything (see picture). Daniel, Carlyn, and I shared one and could not finish. After stuffing ourselves with goodness, the lot of us made our way to the Blue Mosque/Sultan Ahmed Mosque (Sultan Ahmet Camii). This mosque’s construction began in 1609 (with the Sultan breaking the first sod) and opened in 1617. Everyone must take off their shoes upon entering and women must cover their hair with a head covering (scarf). Covering my mass of hair proved to be a feat, but I won in the end. 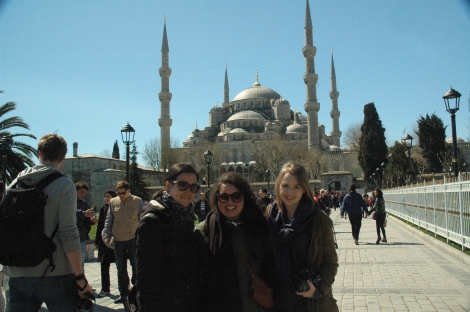 Jolan, me, and Carlyn.

Our next stop was the Basilica Cistern (Yerebatan Sarayı), a massive reservoir. Prior to it being the cistern we see today, a cathedral existed in its place. Like the Hagia Sophia, it was burnt down. The Basilica Cistern was built in the 6th century during the reign of Emperor Justinianus and is supported by 336 marble columns. Carlyn and I got separated from Jolan, Daniel, and Tiffany upon first arriving, but we all had the same dream: to be photographed donning traditional garb for ₺20 (€7.18/$7.61) a photo. After seeing the Medusa columns, we ran back to the photobooth and modeled like our lives depended on it. We were told to keep straight faces, which clearly means I laughed between takes, but gave “dead fish eyes” for the photographs. As an anthropologist, I felt weary about the scenario, but… 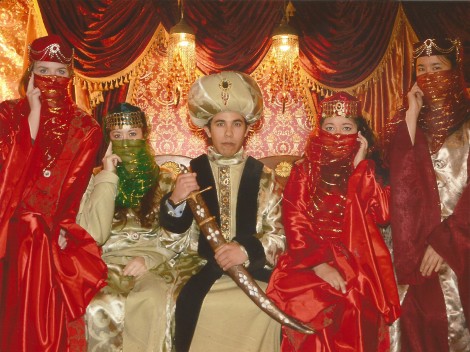 Our final goals for the day were to walk around in the Spice Bazaar (Mısır Çarşısı) and find the elusive “fish sandwich” that more than one person recommended to us. Instead of walking through the bazaar at first, we took a street parallel and ended up seeing our lives flash in front of our eyes. The movement of the mass of people we were smothered by was slow, but steady at first. Then everything changed. We stopped moving for at least twenty minutes. I had everything important in a money belt (a big thank you to my older sister, Maricel, for buying it for me) tucked under three layers of clothing, so worrying about that was the least of my concern. Survival was first. The mood changed from mild annoyance and understanding to full on panic and anger. People began to scream and shove each other – no one was spared from the pandemonium. I ended up using my body as a shield to save this elderly woman from the blows of people around us. Looking ahead, we could see baby strollers held up above the crowd. We finally escaped the madness, but will be forever scarred. My friends and I opted out of walking through the spice bazaar – it just was not worth it. Instead we grabbed some fish sandwiches and took in the glory of the Bosphorus.

Calmness and space – five minutes before the Horror of 2015.

Made me burp and have fish breath for days.

The next morning Jolan, Carlyn, and I flew to the snow-laden city of Sarajevo, which is another (much better) story altogether. It involves love, dogs, hospitals, sadness, and lots of food.

A Lesson From Miss Jennifer: Avoid the Spice Bazaar on Saturdays around 2PM.

5 responses to “A Human Stampede in Istanbul”