This Benedictine abbey was founded in 996 by Grand Prince Géza, father of Hungary’s first king, Stephen I. The monks here founded the country’s first school and, in 1055, wrote the first document in Hungarian. The library, one of the most beautiful places I have ever had the privilege of seeing, contains King Saint Stephen’s letter of decree, which dates back to 1001. Yesterday I visited the archabbey with friend, fellow Central European Teaching Program member, and frequent travel companion, Jolan. The Archabbey of Pannonhalma was added to the list of UNESCO World Hertitage sites in 1996.

We took the train from Budapest-Keleti to Győr, a beautiful city 20km/12mi from Pannonhalma. You can take a train directly to/from Pannonhalma, but it will stop for a time in Győr anyway. If you teach in Hungary for more than a year, you receive a paper that gives you 50% off of trains within the country. My roundtrip ticket ended up being 2.520Ft ($9.29), and the supplement/seat reservation tickets cost me 1.010Ft ($3.72). We then paid 930Ft ($3.93) for a roundtrip Volán bus ticket to the abbey (Pannonhalma, vár főkapu) – the ride was about 45 minutes long. Buses that take you directly to the abbey leave every day at 08:00, 10:00, and 12:00, with an extra bus added on Sundays at 14:10. 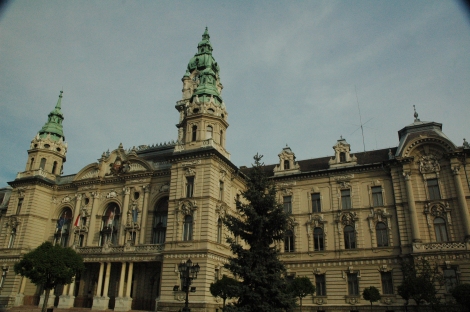 Upon arrival, we were taken aback by the wonderful scents that surrounded us. I wish I could bottle them up and keep the scents forever. The tickets to enter the abbey were 2.200Ft for adults and 1.100Ft for students ($8.11/$4.05). If you go without a tour guide, you will get an audio guide instead. I laughed at the fact that I received one – I have never properly used one before. In general I make my older sister, Maricel, listen to them and tell me cool tidbits. I am absolute rubbish at retaining auditory information. Fortunately for me, I scored an informational booklet at the visitor’s center.

Our first stop was the library – we b-lined it past the basilica. I have always been an avid reader, albeit since being in Hungary the number of books I have devoured is pitiful at best. Growing up, I would read a novel or two a day from my school library, which meant I was always in the top (if not the top) for Accelerated Reader points in elementary and middle school. Fortunately for me, I am a fast reader, because I also watched a lot of anime, played loads of video games, ran around outside with my friends, drew several pictures a night, and played sports for both school and tournament teams. The pictures I saw online of the abbey library were beautiful, but nothing can compare to being in its presence. I choked up a little bit as I ran in. By the end of the 11th century, there were reportedly 80 volumes (200 works) registered in Pannonhalma. Today there are about four hundred thousand books. Belle would have loved it as well. 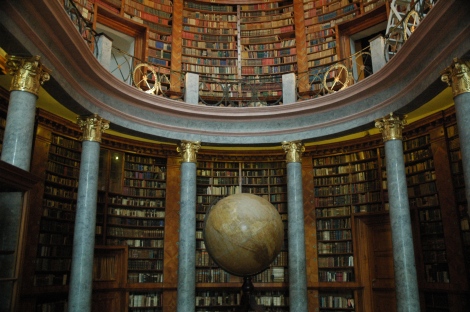 Next, we had to backtrack to see Saint Martin’s Basilica and the Crypt. I have been to many churches in my lifetime, but this was one of my personal favorites. The first monastery built here was destroyed by fire in the 12th century. The greater part of the basilica was constructed in the beginning of the 13th century. According to UNESCO, the monastery “was badly damaged by fire and largely abandoned in 1575, to be occupied by the Turks in 1594.” Renovations to salvage what remained began in the mid-18th century. The heart urn of Otto von Habsburg, the last Crown Prince of Austria-Hungary, is located in the crypt underneath the altar.

The Porta Speciosa, an old entrance to the nave, was built in the 13th century as well. According to the Revelations of St. John, “Heavenly Jerusalem possesses twelve elaborate gates (named after the Lamb’s twelve apostles).” The gate found in the Pannonhalma Archabbey symbolizes one of the gates. The cloister, completed in 1486, is next to the Porta Speciosa. In the “Paradise Garden” (the inner garden) sat a nun, so I refrained from frolicking about there in order to give her some privacy. 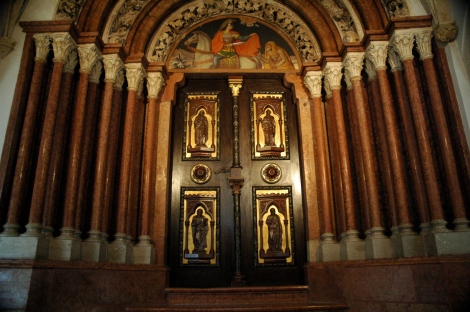 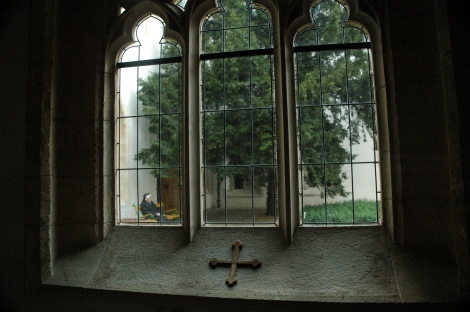 I still took a picture though.

Jolan and I then made our way to the Millennium Monument, erected in 1896 to celebrate the millennium of the Magyars’ settlement in 896. Seven monuments, all honoring the seven Hungarian tribes, were spread out in the Carpathian Mountain Basin. I only know of two – this one and Heroes’ Square. Next to this monument is Our Lady Chapel, originally intended to be a place of worship for the non-native population living near the abbey. The crypt below the church serves at the final resting place for the monks – Benedictine monks still live and teach here today. In the distance we saw a huge wooden tower, so in good fashion we ran over and climbed to the top. Needless to say, it was a much better decision than walking around a cemetery at night. 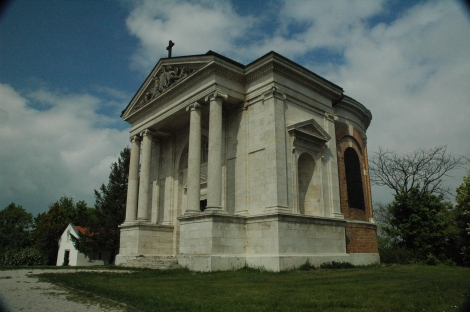 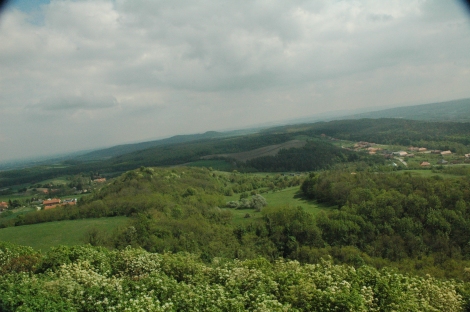 The back of the chapel.

We then hiked down the hill in attempt to get some shots of the abbey from a distance. After eating a slice of dobos cake, we got on the bus back to Győr. Unfortunately we only had an hour and a half to walk around and get something to eat. Győr is definitely a beautiful place! It has the most adorable shop signs I have ever seen. As far as I know, I have been to 33 Hungarian towns. I am saddened by the fact that many people only stay in Budapest and consider their time in the capital to be an all-encompassing Hungarian experience. 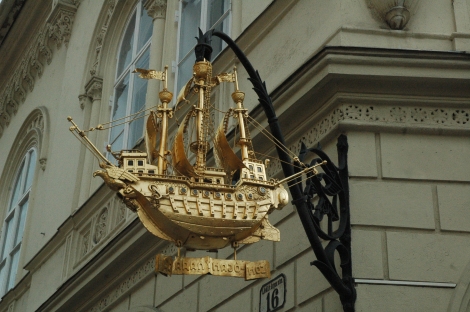 Overall, I would definitely recommend a visit to see the Pannonhalma Abbey. In my opinion, spring is the best time to go! You might even get to see beetles mating like Jolan and I did. Nature is majestic like that, you know.

In other news, I think I get paid tomorrow! A big thank you to my father and older sister for sending me some monetary love.

A Lesson from Miss Jennifer: If your student ID was taken in 2007, you might look a little older than you did back then.

2 responses to “The Archabbey of Pannonhalma”