A few months ago during Chuseok, or Korean Thanksgiving, I went to the world’s largest indoor theme park. I have been curious about Lotte World since first arriving in Korea back in 2015.

When I was younger, I absolutely loved amusement parks. Back in the United States, I frolicked about in Six Flags, Disney World, Wild Adventures, Universal Studios, Summer Waves, and Silver Dollar City (my all-time favorite). Roller coasters used to be fun. With that said, age has been cruel to me. As you probably already know, my motion sickness is off the charts. I went to Everland three years ago and spent most of my time just walking around/eating everything I could get my hands on. I got sick after riding the Viking. I REPEAT – THE VIKING. Life is cruel.

Like when I visited Everland, Lotte World covered in Halloween decorations. Even the charming, cute castle was completely decked out in horror and gore. If you are looking for adorable pictures with your loved ones (or alone #me), then maybe avoid these theme parks from mid-September to early November. 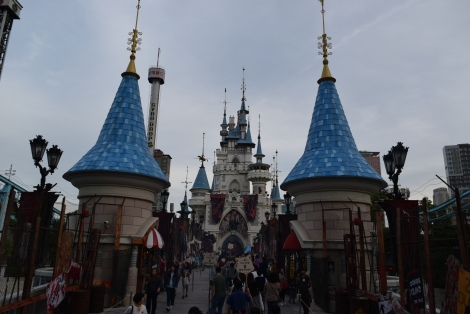 When we first arrived, I made a b-line for the cute headbands for sale. Although I already had a pair of fox ears from Everland, I bought another one at Lotte World. I cannot resist! Since we showed up at around 5PM, we only had an hour or so of daylight left. We headed outside to check out all that was to offer. Since we did not eat before arriving, our stomachs were rumbling. Panda Express was our saving grace. Soon after dining, the sun had basically set. Nicolette and K ran off to ride some rides and I wondered around the premises.

I passed by three people doing caricatures and saw that they were only charging 10,000원 ($8.99) per one. Nicolette previously forced me into doing one with her two months prior and saw me at my worse. I can be the most painfully awkward human and there I was – panicking, sweating, and awkwardly moving my hands and mouth. The artist asked Nicolette if I was okay several times. In an attempt to right my wrongs, I pushed myself into doing one again. This time I was a little less awkward and did not perspire at all. I guess I am growing up after all. When the man handed me my drawing I was alarmed – he gave me blue eyes. Although I was wearing colored contacts because they were the ones Jennie from BlackPink were advertising (such a sucker for an advert), they looked more light brown than anything. The previous artist colored my hair red in the one with Nicolette. Do people just see me with a caucasian lens? I am actually having an existential crisis. If I can remember where I put the picture, I will post it later.

Anyway, it was not long before I heard a song I recognized and people screaming. That happens to me a lot. Chances are there is a celebrity around. A few months ago I saw Blackpink and Tiffany Hwang (formerly of Girls Generation) in the same manner. Apparently Hong Jinyoung (홍진영), a famous trot singer, was performing that day. I heard “ 엄지 엄지 척 (척!) 엄지 엄지 척 (척!)” and headed for the screams. I had previously seen her last year at the Inkigayo Super Concert in Daejeon.

As soon as the concert was over, I planned on at least riding the “hot air balloon” that went around the inside portion of the theme park. My plans were thwarted by an announcement that the parade was starting. Unfortunately, I did not find the parade to be particularly fascinating. I am not knocking the parade because loads of people around me loved it. I am just saying that I was not in the mood. By the time it was over, everyone had already lined up to get on more rides. Not wanting to wait for anything at all, I decided to just ditch the place. In the end, I paid 28,000원 ($25.16) to eat at a Panda Express, get a caricature done, and see Hong Jinyoung since a few songs. It was a wild two hours. 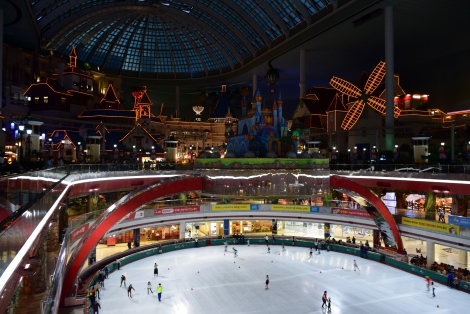 I cannot say if I would go to Lotte World again. It was cool to see it in the flesh, but the reason why I adored theme parks has been destroyed by my ailments. Enjoy your youth, people.