You, fine reader, probably read my last post (if you did not, just play along) and are thoroughly confused. “I thought you were going to Croatia,” you dramatically state out loud while throwing your hands up in the air. Yes… and then no. Due to poor weather and dangerous driving conditions, my friends and I decided that Croatia could prove to be life-threatening if attempted. Two days before we were supposed to be in Croatia, we changed our destination to Poland. That’s right – Poland. A place I have now attempted to go to four times. Something always happens (surprise bills, sickness, etc.), and this instance was no different.

Four friends – Kate, Elena, Caroline, Molly – and I rented a car that was to take us to Krakow, but we never made it to Poland. Fate and a last minute internet search by Elena landed us in a whirlwind of misfortune, life, and love. Our plan was to leave immediately after school on Friday, start driving north, and stop in Slovakia for the night – driving through the mountains shrouded in darkness was not something we wanted to do. We had decided two nights before to just drive until the sun set and then find the nearest hotel. Elena, right before she left school, found a ranch on booking.com that looked promising (“They have horses, guys. Horses.”). On the way, she brought it up. It sounded so absurd and random that we couldn’t say no. The closer we got, the more we realized that it was in the middle of nowhere. Located in Valentová, a village of only 18 people, Ranch Amadeus would soon feel like home.

When we walked into the main building at the ranch, we saw several older Slovakian men sitting at a table smoking and drinking. The room was covered with cow hides, American flags, pictures of horses, Native American objects, sombreros, and other stereotypical Western items. My friends and I felt like we were in a parallel universe – we have spent six months to a year and a half (me) living in the 9th largest city in the European Union. At this time it was as if we had teleported to the heart of Texas. We spent the night speaking with Robert (Bobby), the owner, and Patrick, the cook. Patrick did not speak English, but he knew Hungarian. I always hope to find someone in my travels who speaks Hungarian and I finally got my wish. Bobby, on the other hand, spoke English. He had traveled extensively through the United States, but more particularly the West. The décor was inspired by these travels. The next morning we had planned on hiking a nearby mountain alone, but Bobby, an experienced guide, insisted that he and his son, Radoslav (Rado for short), take us. We joked that we wanted to stay at the ranch forever. Irony to follow.

Just a little taste of the glory which was this place.

We packed up the car, said our goodbyes, and followed Bobby and Rado through winding, mountain roads to what I thought would be a quick, easy hike before we moved onward to Krakow… of course I was mistaken. When we got out of the car, we were almost blown over by the sheer force of the wind. We were to climb to a stony peak called Kľak. Kľak is part of the Malá Fatra (Little/Lesser Fatra) range in Slovakia and is 1,352m (4,435ft) high. Our car had no trunk, so we covered our belongings with  Kate’s jacket. Before we left, I grabbed my wallet out of my purse and hid it in another compartment of the car – an instinctual action that would prove beneficial in two or three hours.

Bobby teaching Caroline and Kate about the landscape before our hike.

Twenty minutes into the hike I knew that I would be seeing the backs of my friends (who run six+ miles a day for fun) for the whole duration of the excursion. Right as we reached the halfway point (Reváňske Sedlo – 1,184m/3,884ft high), the snow laden trail narrowed. In good fashion, this is where I slipped and fell. Rado managed to grab me before I slid down the mountain. Covered in snow, I caught up with my friends and we took pictures celebrating the halfway mark. Molly, Rado, and I turned back to go to a restaurant (the trail got harder – no thanks) while the rest of bunch pressed on. I am going to say that the gods above caused my exhaustion, for turning back was one of the best decisions of the trip. During our trek, someone smashed through one of the back windows of our rental car and stole Kate’s jacket and my purse. Unfortunately for Kate, she had accidentally left her passport, bus pass, and flat keys in her jacket pocket. Fortunately for me, I took out my wallet and hid it in another place (as previously mentioned). Rado called the police and the waiting game began – for the police and our companions. A ski resort nearby was playing music loudly. Because my life is art, this song [click here] started playing a few seconds after we discovered the burglary. These are the items that I am aware were stolen from me: iPod touch, cellular phone, DSLR camera battery, DSLR lens caps, journal, and clothes (yes, I put clothes in my purse). The hunt to find replacements should be interesting to say the least.

The start of the hike.

Bobby and Rado speaking to the Slovakian police for us.

Rough estimates, but: two+ hours waiting for our companions. One hour in a restaurant while the police collected fingerprints/inspected the damage. Six+ hours in a Slovakian police station with Kate, Rado, and a friend who served as a translator, Maja. The rest of my friends sat in the car (none of their stuff was stolen) for a few hours then they were taken to a bar. Kate, Rado, Maja, and I became a little loopy and delusional after hours of sitting there – a little loopy and delusional = gross understatement. There were times when we just laughed about nothing and couldn’t stop. I found out later that Rado was missing his little sister’s birthday party to help us. We had just met, but everyone on the ranch took extreme measures to make sure that everything was/would continue to be okay. That night we were even invited to a party (even though we were way too tired to attend). The beauty in people, humanity, it still exists.

Determined not to let this instance deter us from having a good time, we decided to stay at the ranch for the rest of our vacation. The ranch felt like home – we were safe and happy there. The following morning we drank several cups of žihľava dvojdomá (stinging nettle/Urtica dioica) tea and then we learned how to ride horses. Most of us had only been on a horse once or twice when we were young. We learned two different styles of riding and a few of us even galloped. Afterwards we helped make sausages. Luckily for us, we didn’t have to prepare the meat – we just stuck the meat in a cylinder, placed the casing on the end of a tube, turned a handle, and guided the sausage. As a former hardcore vegetarian, I almost couldn’t handle it. As an anthropologist, however, I couldn’t turn down such a cultural experience. I am proud to say that I made the longest sausage. Also: All of us are relatively innocent. When asked to place the casing on the end of the tube (it’s thin and white), we used our whole hand to direct it onto the tip of the machine. The men roared in laughter and we couldn’t figure it out. Caroline noticed later that they put it on in a, well, less sexual manner. Oops. We ended up eating that very sausage later that night for dinner. Awesome, I know. 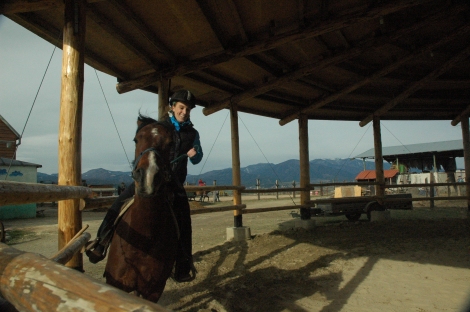 Rado after handling the meat.

Our final products. I made the biggest one. 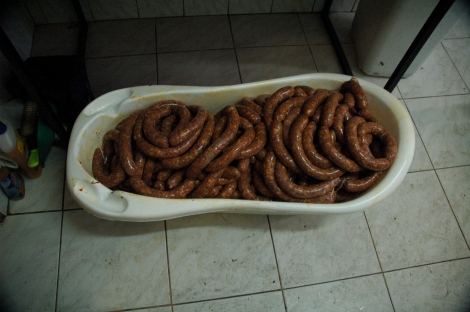 After eating lunch, Bobby took us to a 13th century castle called Blatnica Hrad (Blatnica Castle) in the Veľká Fatra (Great/Greater Fatra). We hiked for only about ten to twenty minutes, but it was harder on us because we were sore from horseback riding (truth be told, I am still sore from the ride). The placement of the castle was breathtaking – one side: plains, another side: valley/mountains. Bobby taught us the history of the castle and before we left we yelled loudly to listen to our echo. Two things were checked off my bucket list in Slovakia: 1) ride a horse without a lead 2) hear my echo bounce off of mountains. 2014 is proving to be quite kind to me (well, with the exception of the burglary). We then jumped back in the car, drove through some fields, and ended up at a deer sanctuary. The sun was almost fully set by the time we reached the deer, but we could hear two bucks fighting in the distance. I have missed the “silence” nature provides. Bobby then took us to get cakes in another town before we were given our second horse riding lesson. My friends poetically (and somehow correctly) described me as an “Arabian Princess Queen” when I ride a horse. Honored.

Saying goodbye that night was tough. I don’t know if we will ever be as unconditionally loved by strangers as we were at Ranch Amadeus. We have already planned a return trip and Bobby, the smiling Slovakian cowboy, has plans to visit his “angels” soon. 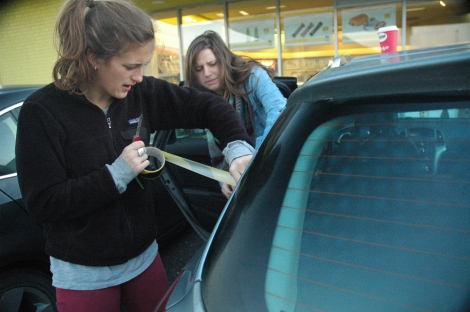 Taping the window up again.

Caroline and Elena are so good at it.

The items that were stolen from me are replaceable, but the experience is mine to keep (please, no inceptions). I saw a sky of stars untainted by light pollution for the first time since August 2012. I want to hold on to these emotions forever.

A Lesson From Miss Jennifer: Don’t buy an awesome, trendy bag the day before you leave. Some people might like it a little too much.

4 responses to “A Burglary in Slovakia”