I learned while writing this post that my fingers refuse to type “lantern” correctly the first time. I am prone to type l-a-t-e-r-n instead. Cool story, bro.

The Seoul Lantern Festival (서울빛초롱축제), started in 2009, displays lanterns created by both local and international artists. These lanterns are placed in the middle of the Cheonggyecheon Stream. This waterway, although found in the center of town, is relatively quiet due to the fact it is roughly five meters below street level. Starting at the Cheonggye Plaza and ending in the Han River, the stream is roughly 11km long. I first visited it back in August with my friends, Monica and Brent, and quickly came to the conclusion that I was one of the only single people on the premises. Needless to say, Cheonggyecheon is a popular date spot.

Looking down from the street.

I attended the festival with a few of my friends – Nicole, Mike, and Danni – on its last day (November 22nd). Unfortunately for us, it rained the entire time. I should have just succumbed to the beauty of the poncho a man tried to sell me. The umbrella Nicole and I shared did little to keep my arms dry.

Under one of the overpasses, people were given the opportunity to write something on lanterns and place them into the stream. Each lantern was ₩3,000 ($2.60) and had a pretty anticlimactic ending – they floated for a bit, then were stopped by a huge green mesh fence. We saw a woman put out the flames with the end of an umbrella. As she did not have any official gear on, I am not exactly sure if she really worked for the festival. I loved watching people wait in a line for an extended period of time, place their lanterns in the water, and have a random woman extinguish the flames. Intoxicating, really.

Although all of the lanterns were impressive, I abhorred seeing the Turning Mecard ones. For those of you who do not know, Turning Mecard (transforming robot toys) is extremely popular among young children here. I cannot go a day without hearing my students talk about it. One of my kindergarten classes, (Korean age: seven, Western age: six), have passionate debates during lunch. The only good that has come out of this obsession is the realization that a lot of children struggle with the “f/ph” and “x” sounds. A child came up to me asking how to spell “penis” and I was, as one would expect, horrified. Fortunately for the both of us, he quickly showed me a picture he drew of a phoenix. PRAISE BE. 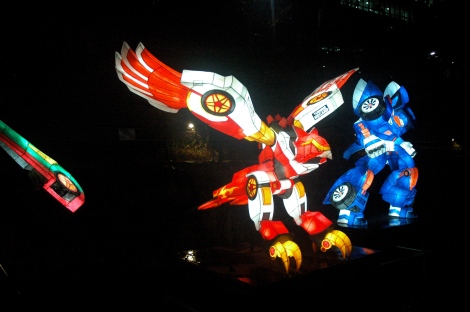 The source of misunderstanding.

After walking around the festival, Nicole, Danni, and I headed to Gwangjang Market to grab a bite to eat. Gwangjang Market was the nation’s first traditional market and still remains popular today. By the time we arrived, most of the stores were closing. We were on the hunt for hotteok (호떡), but ended up getting tteokbokki/ddeokbokki (떡볶이) and japchae (잡채) instead. The three of us also enjoyed freshly squeezed lemon and pomegranate juice mixed with Sprite. I plan on going back to this market one day, but this short paragraph will have to do for now. 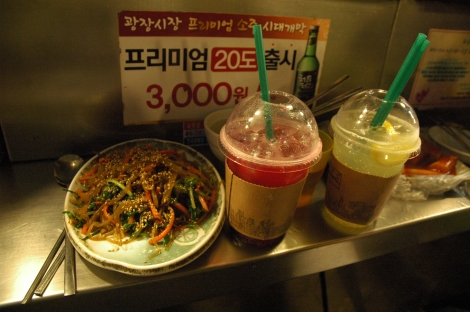 I mentioned before that Monica, Brent, and I ended up in a You Are Here Café video. I have managed to get into another one with my friend Emily. Click [here]. Megan, another friend, and I recorded a bit and hope to be in the final cut. I look forward to the day someone comments something along the lines of “Why is that one girl always at your café?!” THE MILKSHAKES, THAT’S WHY.

Lastly, it snowed the other day in Seoul. I almost pitched a fit, but the joy on my students’ faces was too pure for even a Grinch like me. Soon not even that will warm my cold heart, as I have little to no winter wear. Payday, I miss you. Visit soon.