If you were sitting in Section C, you probably noticed an obviously single 26-year-old woman screaming and crying while wearing a Harry Styles mask. That was me. A week ago at this time I was having the time of my life with 45,000+ fellow One Direction fans. Although I generally avoid traveling to the same place twice (I visited Vienna in 2012 with my older sister, Maricel), seeing my boyfriend, Harry Styles, was well worth it. Truth be told, I don’t know if I will ever love someone more than I love him. Tragic, I know.

No need to be jealous, folks.

I left from Budapest-Keleti at 07:10. With just a small backpack and my iPhone loaded with every One Direction song, I crawled onto the train. The girl beside me was a beautiful Hungarian (adjective + noun combination that should not be surprising) on her way to Munich. We conversed a little in Hungarian and then I passed out.

Upon arriving, I purchased a transportation pass and b-lined it to the city center, Stephansplatz. I had two hours to burn before meeting up with my Airbnb host, so I figured I would pop in some shops while I had the chance. If possible, I avoid the hostel scene. I just cannot be bothered with it anymore. If I do stay in a hostel, I generally opt for private rooms. My flat was located a short distance away from the U-Bahn station Nestroyplatz and a police station. I strolled over to a nearby Billa (grocery store) and bought some healthy stuff for lunch, dinner, and breakfast: Haribo Fruity Pasta, Honey BBQ Kettle Cooked chips, muffins, pita bread, and sesame seed hummus.

I decided to go on a short walk around Schwedenplatz for a bit before going to the Ernst Happel Stadium, where the concert was to take place. I got stopped by a lady asking if my hair was “real” or not. My majestic mane is too much for many people to comprehend I guess. I arrived at the stadium at around 16:30 after being crammed in a U-bahn carriage with fellow fans and their chaperons. It smelled like a mix of Limited Too, gym socks, and regret. I told myself that I would not buy any One Direction merchandise, but the “On the Road Again” tour flag was too tempting to pass up. Luckily my dear friend Molly sent me $50. Upon arriving at the stadium, I was instantly surrounded by girls wearing handmade shirts. One said: “Niall the Badboy?! Niall the churchboy, more like!” I should proofread handmade One Direction shirts for a living. I think I could make bank. While waiting in line, I struck up a conversation with one of the venue employees. He laughed at the fact that I was attending the concert by myself, but “admired [my] dedication.”

I purchased my seat ticket back in November while visiting my friend Elena in the Netherlands. I considered purchasing a ticket in the standing area, but had horrible flashbacks to seeing Fall Out Boy, All Time Low, and Cobra Starship back in 2009. I used to go to some hardcore/screamo shows back in the day and the moshing/fighting was nothing compared to the abuse I endured at the hands of 14-year-old girls seeing their crushes for the first time. If I could do it again, I would have just shelled out more money and gotten VIP passes with early entry.

The first band, McBusted, was okay, but I do not know any of their songs. They played “Year 3000” by the Jonas Brothers (to which I freaked out and screamed every word), but most people around me did not know it. It was released almost ten years ago, so I am guessing that the young teens I was surrounded by wouldn’t have had solid memories of it. Finally, after waiting for four hours, One Direction finally took the stage. I sat between two girls who were also attending the concert solo, but we only made small talk. The girl to my right asked if I was a fan, and I played it cool with a casual “Yeah, I guess you can say that.” When the guys took the stage, however, I lost it. I screamed and danced for the whole two hours they were on stage. I almost fainted when Harry pulled his hair into a man bun mid-concert. One comment made to me by a neighboring fan: “You really do know every word to every song.” Why yes, yes I do (KATA, WHAT ABOUT YOU?). Truth be told, it was one of the best nights of my life. During the concert the boys went on about how the gig in Vienna was the best on tour so far. Niall tweeted: “Tell Ya what! That gig tonight in Vienna was hands down one of the best shows ever! The crowd were so up for it ! Thank you guys.” Louis tweeted: “Today’s show was one of my favourites for a long time !! Thank you so much Vienna !!” I am proud to say that I was a part of that. 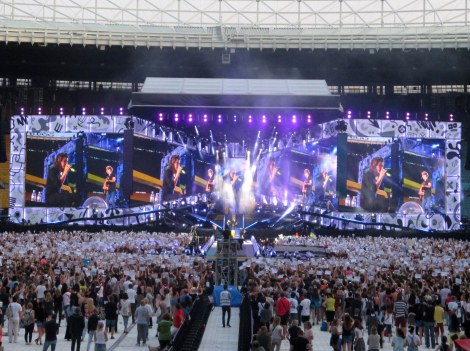 THIS CONCERT GAVE ME LIFE.

The next morning I considered going to Schönbrunn Palace. When I visited three years ago, it was one of the only places that my sister and I did not get to see. In the end, I decided against it. The $22 I used to buy the flag was what I was going to use for admission. I currently have $172 and owe $120 on my credit card (rich as always, I know), so I figured it would be best not to increase my debt. It was crazy how much I remembered from the few hours I walked around with my sister. I only used my Triposo map once or twice. If you are not familiar with Triposo, I highly recommend downloading their country/city guides. Everything is offline! 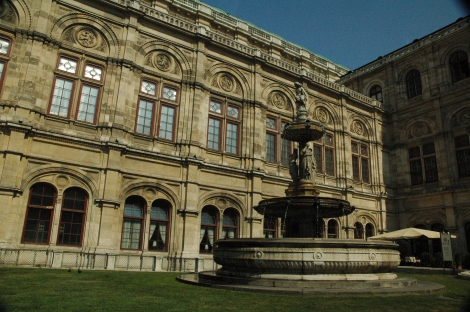 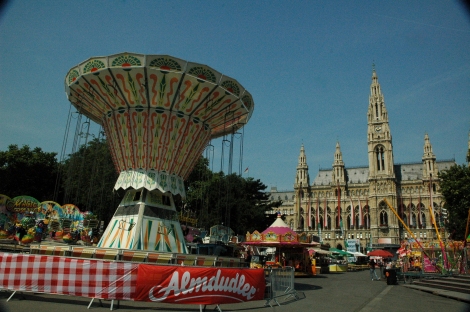 After a few hours of walking around, I made my way back to the train station with thirty minutes to spare before my train was to depart. Unfortunately for me, the train ended up being an hour late. I did not mind though – I was tired and my feet hurt. I plopped down, attempted to drink an Almdudler, and played Candy Crush Soda and Punch Quest. The ride back was relatively uneventful. Well, if it was eventful, I slept through it.

I am glad I gave Vienna a second chance. It was much more pleasant the second time around. One Direction, I will see you next tour. You can count on that.

Lastly: Happy 3rd Birthday to my blog! I also have my own domain name (at the low, low price of $99 a year – ten cheers to being out of storage space and having to upgrade!).

A Lesson from Miss Jennifer: Do not show up to a concert four hours before the main act is scheduled to perform.

6 responses to “One Direction in Vienna”