My decision to travel to Hong Kong for two and a half days was completely spontaneous. I searched for tickets to Tokyo, but booked a flight to Hong Kong instead. Since living in Korea, I have only ventured out of the country four times (Vietnam, Japan, Taiwan, and the United States). Compared to when I lived in Hungary, I travel abroad far less. I desperately needed this vacation.

When I arrived to the airport for my 5AM flight, I noticed that the whole place was basically a ghost town. I checked in, went through security, grabbed a muffin, and reached my gate in thirty minutes. To pass the time, I sprawled out on a row of seats and played some phone games.

The flight itself was pretty dreadful. As a light sleeper, being placed next to a man with a horrible case of sleep apnea was not ideal. Finally, after a few hours, we landed and I dashed off the plane. My first stop was to buy a SIM card from 7-11. I got the CSL 8-day tourist SIM for HK$118 (₩16,040/$15.03). Even though I was only going to be in Hong Kong for a short time, I chose this SIM card because it had 5GB of data. My plan in South Korea gives me 15GB of data per month, so I am used to having a lot at my disposal. Next on my list was to get an Octopus card. An Octopus card was initially only used for transportation, but now you can use it to pay for stuff at most stores.

After sorting everything out, I took a taxi to Tung Chung. I stuffed my backpack in a locker in the basement floor of City Gate Outlets (highly recommend) and headed towards the Ngong Ping 360 cable car. Since I was traveling alone, I got picked to skip a lot of the line. After 25 minutes of soaring in the sky, the strangers I rode with and I could see Tian Tan Buddha (known informally as “Big Buddha”). Tian Tan Buddha is a 34m (112ft) tall bronze statue of Buddha Shakyamuni that was finished in 1993. On the way to the Tian Tan Buddha, one must walk through Ngong Ping Village. It was alright, albeit touristy. The “village” is basically a glorified souvenir shop.

Once I made it to the base of the stairs, I was hesitant to start the ascent. To be honest, a large percentage of 80-year-old women have better knees than I do. With that said, I came, saw, and conquered. I actually did not have much difficulty with them at all. The view from the top was absolutely gorgeous. If you are physically able, definitely go to the top! 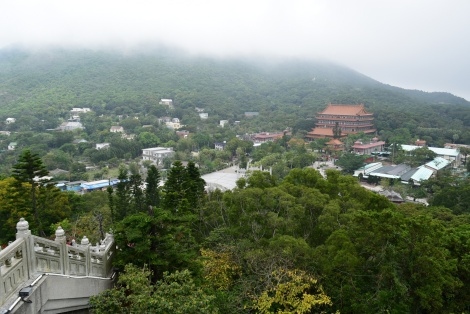 Next, I headed towards Po Lin Monastery to grab a bite to eat. The Po Lin Monastery, founded in 1906, houses three Buddha statues. A bit famished, I decided to stop at the “vegetarian deli” at the monastery. I got a sesame ball, fried noodles, and a spring roll. They were delicious. 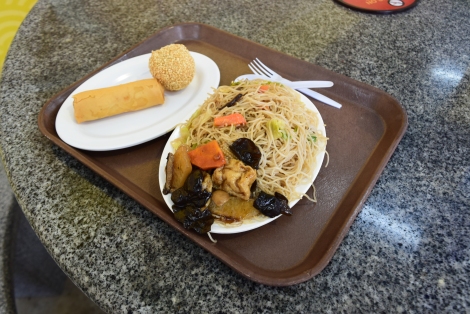 After munching, I headed toward the Wisdom Path. Out of everything I did in Hong Kong, the Wisdom Path was my favorite. Located not too far from the Tian Tan Buddha and Po Lin Monastery, the Wisdom Path is made up of 38 wooden pillars that have verses from the Heart Sutra written on them. I had hoped for a bright, sunny day, but the looming clouds above made for a better atmosphere. I walked amongst the pillars and decided to sit down for a while. It was one of the most peaceful places I have ever been in my life. 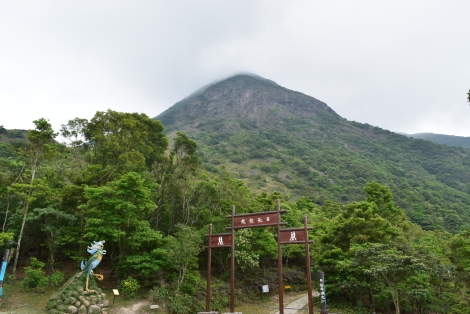 Next on my list was the fishing town of Tai O. I hopped on a bus and thanked the sun and stars that I had taken a motion sickness pill earlier in the day. Tai O used to prosper from fishing, but now relies heavily on tourism. Most people come to see the stilt houses and the pink dolphins. I mention time and time again that I love boats. Being on a boat in the South China Sea was a wonderful experience. Everyone sat peacefully, looking out into the open ocean. The boat driver sang softly to himself. 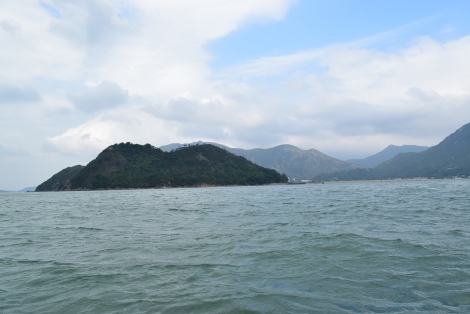 After docking the boat, I left Tai O and took a taxi back to the Ngong Ping 360. I took the cable car back to Tung Chung, grabbed my stuff, and took the metro to Causeway Bay – the location of my hostel. Throughout my trip, I watched episode after episode of Sherlock. Benedict Cumberbatch and Martin Freeman kept me company for most of the queues and metro rides. Thank you, gentlemen, for traveling around Hong Kong with me.

The next morning, I left my hostel two hours later than planned. My hostel room was pitch black – not one ray of light could find me. I generally wake up to the light of the sun, so the lack of sunlight really messed with my mind. I finally made my way to the Peak Tram and gasped in horror at the length of the line. This tram is the best way to reach Victoria Peak, the highest point on Hong Kong Island. I pulled out my phone, watched more Sherlock, and finally made it onto the tram. There were times that the mountain was so steep that I could have sworn that we were completely vertical. If you care to get on the tram, show up early if you want to beat the lines.

The view from the top was breathtaking. I had to wait time and time again for people to move because they were taking “selfies.” I can excuse a few, but throughout my trip I noticed that people kept taking them at every single turn. Must you photograph yourself with everything? I suppose we all travel differently, so who am I to judge? 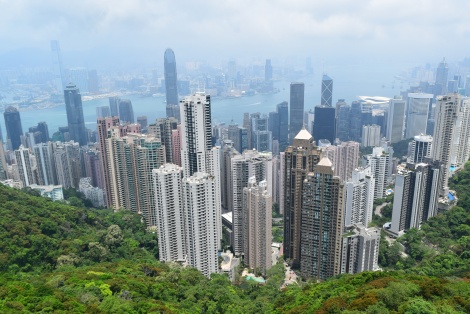 I took the tram back down the mountain and walked for thirty minutes toward Kau Kee. One of my bosses kept recommending this restaurant to me, so I decided to give it a chance. When I travel, I rarely eat well. This time was no different. As I made it to the restaurant, I saw that the line was insane. Not wanting to bother Benedict and Martin anymore, I walked past and ate lunch at a convenience store instead. I will not make any food lovers proud in this post. 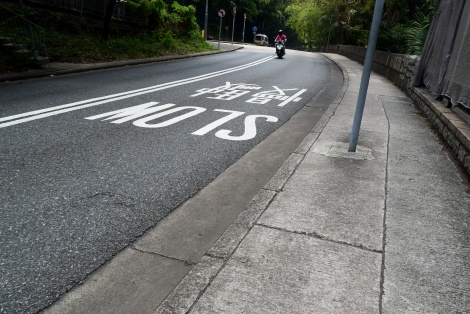 I stopped by Man Mo Temple for a bit and fell in love with the lamps. I do not know if there is a special name for them, but they were beautiful. Whenever I go into different religious places, I try to stay out of the way of those actually worshipping. As said earlier, people love to take selfies. One lady had a full photoshoot in a place where a man was waiting to pay his respects. I suppose I am judging.

Next on my list was Victoria Harbor. As I was by the ocean yet again, the wind was delightfully strong. The humidity and wind did no favors to my hair though. My lion’s mane was as big as the Tian Tan Buddha itself. I sat down and watched ships come and go for a while then got a ticket to ride the Hong Kong Observation Wheel. At HK$20 (₩2,720/$2.55), it was a deal. 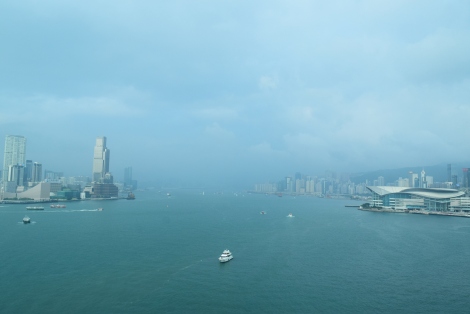 Realizing I still had two hours until sunset, I grabbed some ice cream, claimed a picnic table, and chilled until nightfall. The Symphony of Lights was to start at 8PM, so at 7:30PM I began walking around looking for the perfect spot. The best part of the light show was the commentary from the Filipinas I chose to sit beside. They reminded me of my titas back in the United States – hilarious and ridiculous. If I could do it all again, I would have opted out of the light show though. 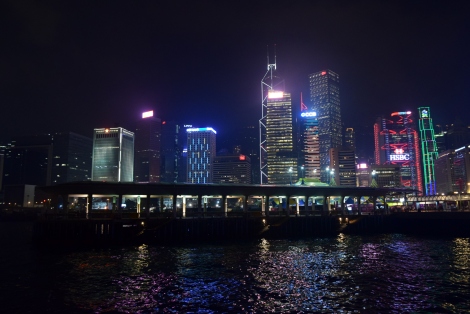 Not willing to call it a night, I went to the Temple Street Night Market and got conned into spending money for things I did not necessarily want yet again. I should avoid markets at all costs. At least no one kissed anyone like at the Grand Bazaar in Istanbul (Carlyn, I know you’re reading this post…). I finally decided to head back to my hostel. I looked in the mirror for the first time all day and realized, like the Grinch and his heart, my hair had grown three sizes.

The next morning I checked out of my hostel and had to figure out what I was going to do with my backpack. I did not have to be at the airport until 2PM and I loathe carrying anything extra around. I dropped my backpack off at the left luggage area located in Central Station. I paid HK$69 (₩9,380/$8.79) to store it for three hours.

I went to check out the Bird Market first, but was gravely disappointed. The main area was closed and there were signs warning people about a bird virus everywhere. I quickly made my way off the premises and checked out the Goldfish Market instead. A lot of artists film music videos in Hong Kong, and I remembered seeing the Goldfish Market from GOT7’s “You Are” MV. It was not as cool in the flesh, but it could also be because I am terrified of fish.

Last on my Hong Kong adventure was the Sik Sik Yuen Wong Tai Sin Temple. It is a place where those practicing Taoism, Buddhism, and Confucianism can all worship. Although this temple was a private shrine at first, it was opened to the public in 1956. The area around the main altar and worshipping platform was crowded, but I found space to move around near the garden in the back. I walked around for a bit before realizing it was time for me to head to the airport.

With the exception of the hour delay on the runway, the flight back was much better than the flight to Hong Kong. The girls beside me slept quietly while I listened to music and looked back at my pictures. Overall, I had a lovely trip and definitely recommend Hong Kong to anyone – especially for a solo traveler. Now all I want to do is plan my next adventure. Money, find me now!